Artificial Intelligence and Machine learning have together catalysed the way technology is viewed. Artificial intelligence is increasingly being used in various fields and sectors to improve the companies bottom line. Investing in artificial intelligence robots is one investment that is sure to give you an excellent return on investment. We are always dependent on algorithms to make our choices. Computers are becoming dramatically lighter, thinner and smaller. While the speed of progress continues accelerating, it will be interesting to see the AI developments being implemented in the following fields:

Why should you consider integrating AI and Machine Learning?

What if you could use this technology to help your consumers better their lives? The positive news is that the same machine learning techniques used inside these major organisations are provided to the general population by different companies, such as AWS, Google Cloud Platform and Azure — for a price, of course. There was a simple, overriding theme at AWS re Invent 2019: machine learning. And not just machine learning, but the primary drive toward using technologies that will make better real-time decisions toward your company, with limited interference from your organisation (naturally, once it is set up). So what makes artificial intelligence and machine learning work? Data — and loads thereof. It would help if you played with machine learning and data lakes to make things practical and build an accessible data culture.

Let’s assume you’re a profitable and productive company that is working to discover its most valuable pool of customers. Knowing this knowledge will allow you greater insight into which solutions perform well for growing clients. This ensures that you can make strategic and organisational choices more educated, focused on customer engagement. You might look through the financial reporting systems to see which goods are selling the most, but it just shows you the items are selling, not who is purchasing them. And, in your independent, disconnected-from-the-financial CRM program, you dig deeper to consider the kinds of consumers purchasing such goods. There, you can discover this with any manual or production effort.

AI and the government

When machine-learning capabilities grow, policymakers across the world are expected to spend ever more in AI science. IDC forecast that spending in computational and artificial intelligence technology by the U.S. government would rise at a CAGR of 54.3 per cent during 2018-2021. State and local agencies are actively partnering with academic and business leaders to bring AI initiatives to life that vary in scope from traffic management to the digitization of government records backlogs. In 2015, the United States Citizenship and Immigration Services (USCIS) unveiled a chatbot named Emma. Emma will apparently be able to address immigration questions and direct guests to the correct USCIS website location. The USCIS generated a large number of client requests, including more than 14 million calls per year about immigration problems. Click on the “Ask a Question” and “Need Help?” Ask Emma’s ties in the USCIS home page’s upper right corner. For situations where Emma is unable to locate the right facts, the app can eventually transfer the customer to a human user. This is just one of the many aspects of government machinery where AI has proven to increase efficiency and almost cut the time being wasted on unnecessary red tape in half.

AI’s Effect on the Economy

According to a September 2018 McKinsey Global Institute study on the effect of AI on the international economy, Artificial Intelligence has the ability to contribute incrementally 16 per cent, or about $13 trillion, by 2030 to total global economic output — an annual average contribution to GDP growth of around 1.2 per cent between now and 2030.

These economic changes powered by AI would have a huge effect on a variety of factors. AI could contribute to approximately 26 percent or $22 trillion of gross GDP growth by 2030. The key contributors to this statistic are labour productivity, which could add up to 11%, or about $9 trillion, to global GDP by 2030, and product and service advances, which could raise GDP by about 7% or about $6 trillion by 2030. 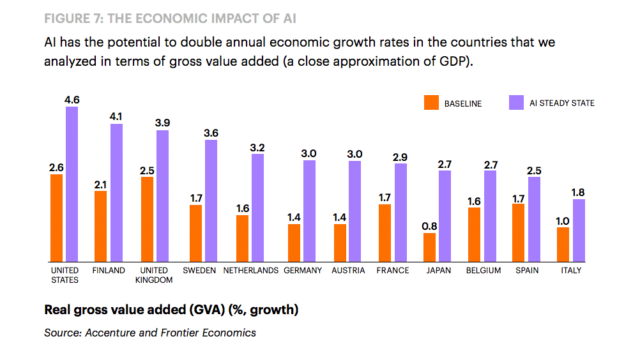 Machine Learning is here to stay. It’s open, and the infrastructure has advanced now to a point where every company, not just Google, Microsoft and Apple, will make use of such advancements to have a meaningful difference on their clients and the planet. This isn’t too late. It ‘s just the start.